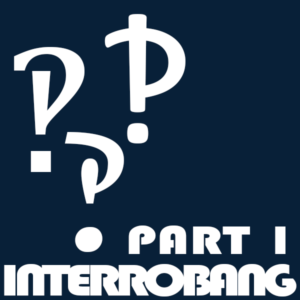 In last month’s post, I was delighted to find myself in want of an interrobang at the end of a sentence.

Do you know what an interrobang is? Well, it got me thinking that you might want to take a bit of a detour into something non-legal for a minute. Although, you will find, this is not so much the non sequitur one would think.

Here, in Part 1, you’ll learn what the interrobang is, where it came from, and if it might just be bound for greatness in the world. Let’s start at the beginning.

What on Earth is an Interrobang?

The interrobang (or interabang) deserves so much more attention than it gets. It’s quite likely that you may have never even heard the word before, and yet it describes something that, despite being small, contains wonderful emotional power in its very existence.

The interrobang is a piece of punctuation that appears as though a question mark and an exclamation point had a full-grown baby, and it serves as an end mark to a sentence; just like its more famous family members. The name for the glyph itself derives from the combination of the parent symbols. “Interro” comes from “interrogative”, as in questioning. And “bang”… well, there are some other fun-facts there.

Bang, has a few facets to its origin story. Back in the day, when type was set by hand and letter by letter, it was much easier to say, “Pass me a bang,” than, “Hand me an exclamation point.” Some say that comic books played a key role in using the word “bang” as shorthand, thanks to the use of dialog bubbles for inanimate objects. When a gun goes off in the story, “Bang!” says the pistol. “Bang” as slang, is also known to hale from computing, thanks to the loud sound the card punch made when coding the exclamation mark. So there you have it. Interro-bang. Pick your story and stick to it!

Who Came up with the Interrrobang?

It was created in 1962 by successful ad man Martin Specktor. The interrobang was defined in his obituary as “the typographical equivalent of a grimace or shrug… when a writer wished to convey incredulity”. Therefore, written sentences such as, “You aren’t thinking of wearing that, are you”, can be more cleanly and accurately conveyed if they end with a “‽” rather than a plain old question mark with an exclamation point tacked on its backside.

Thanks to the interrobang, phrases from classic commercials like “Where’s the Beef”, and famous movie lines such as Robert DeNiro’s emphatic utterance in Taxi Driver, “You talkin’ to me”, really do have a punctuation mark perfectly suited to their needs. Where’s the Beef‽

For Seinfeld fans out there, the interrobang may be the perfectly delicious, typographical embodiment of Frank Costanza, George’s irate dad. Can you picture the scene? Sitting with George in the little corner restaurant, Frank learns from his son that Jerry had caught sight of him on the street earlier in the day but failed to run over and greet him. Immediately offended, Frank shouts at the top of his lungs, “Why wouldn’t Jerry say hello‽” Now THAT deserves an interrobang!

The Little Interrobang that Could

Although it had been around for well over 50 years and can be found in a number of fonts like Arial Unicode, Lucida Sans Unicode, and Palatino Linotype, the interrobang has consistently experienced real difficulty catching on, and being taken seriously. The trouble? It seemed that, whenever one might see it outside of the realm of an ad agency’s copy department, this piece of punctuation would invariably be used as a novelty or merely an odd, little bit of grammatical fun. The poor interrobang was a fluffy curiosity. It had no street cred; no gravitas.

Fear not. Hope yet remains for the plucky interrobang. This little guy isn’t down for the count quite yet. Things may at last be looking up for this black sheep of the punctuation family, and the first real step toward serious, public acceptance of the interrobang may have come from – wait for it – a Judge!

And THAT’s where it all begins to come full circle! The interrobang is about to get some respect! Now that we have a Judge in picture, this article is beginning to make some sense. I hate to leave you hanging, but I do promise to tell you the rest of the Interrobang’s story in the next post or two.

What’s Coming Up Next?

Well, did you know that we have a series of posts on how IMPORTANT it is to take a fresh look at your old trust? There may be BIG holes in your bucket, and the money may be leaking out! If you want to get up to speed before July’s post on the topic, you can start at the beginning with Mrs. Smith, who saved her children $300,000 in taxes.

If you have questions about your trust, and if you wonder if it’s time to update it, simply make an appointment for a FREE 30-minute Legal Consultation  so I can look over the trust, tell you what it says, and see if an update is in order.  If I drafted your trust, call me, I will look at my file and let you know what I find.

In July, we welcome my colleague Patrick R. Bartelmie. Patrick will drop in to let readers know about times when a traditional A-B Trust is still appropriate. Make sure to check back to learn more!